“As of February 2 [1997], Groundhog Day, progress is being made each day that we work on the building.  January was a cold month, and interior work was limited to those rare above-freezing days.  Restorations of the front windows and doors is being done in the comfort of Jack Kelley’s workshop.  A major milestone was achieved this past week when electric power was restored to the building and we could retire the noisy portable generator, affectionately called “the H.I. Lincoln Power & Light Co.”

To review the past year, at this time in 1996, we still had several truckloads of frozen debris to clear out before any restoration could take place.  This was a dirty task, especially on one rainy Saturday when we removed buckets and wheelbarrow loads of junk while the rain dripped in through the holes in the roof.  The roof is now covered with tarps, and except for some leaks, the inside is relatively dry.  As we cleared out the interior and tore down the steps to the second floor, every salvageable piece of wood was saved and stored to dry out and eventually be restored.  The goal of our “preservationist” Ron Nelson is to use as much of the original as possible.  Unfortunately, the floors are gone and will be newly constructed.

We engraved two days a week working on the building during the past year.  Four or more volunteers and Ron Nelson made up the usual crew.  The greater part of the summer and fall was spend on tuck pointing.  The walls were in bad shape, with the mortar missing and stones seemingly held in place by the mere fact that they had been there since 1860.  It isn’t as simple as tuck pointed a brick wall, for there are no straight edges or angles, and a narrow space in front could lead to a wide chasm behind.  That necessitates painstakingly removing the crumbling mortar, dirt and bird “stuff” before repacking the cavity with a special mortar mix.  The upper part of the building is in especially bad condition.  As we finished the front wall this fall and all but the top of the south wall before cold weather stopped this work, re realized that we could not replace the rod until the tuck-pointing is completed.  The roof trusses are on hand, and a new roof is high priority this spring so that we can put down the cypress floor and finish the interior.

Before extensive work could be done on the front wall, we had to build up cribs of railroad ties inside and out and install steel beams to support the wall above the windows and door.  On the inside, the wood beam situated above the opening was rotted on the north end and a section had to be replaced.  A steel plate was fastened to the back of the beam for strength.  The tuck-pointed was then completed on the front side.

The “H.I. Lincoln, 1860” lintel over the front door had broken into eight pieces many years ago.  It was painstakingly removed and taken to Jack’s workshop, where it was restored using a special cement.  The lintel has been put back in place and it looks like the original once again.  There was a feeling of satisfaction as we removed the cribs and jacks and built a plywood covering over the exposed front section to keep out the winter winds.

Much time has been devoted to repairing and restoring the exterior woodwork. It took well over a day to remove the south door and frame.  Jacks and heavy timbers were used to shore up the lintel above the door. It was dirty work as debris constantly filtered out of the space between the inner and outer walls.  The woodwork was repaired, broken window panes replaced with old, wavy glass, and the frame was put back in place and primed.  The front windows and doors were removed.  Broken and missing sections of the framework in the nine pane windows were rebuilt.  There was rot in the bottom of the frames, which was filled or strengthened with special adhesives. Old, wavy glass has replaced the broken panes, the wood has been primed, and the windows are now being put back in place.  The doors are being rebuilt at this time.

Inside the building, two beams have been built for both the first and second floor and are seated back in the original pockets in the inner wall.  Floor joists have been put in place, with the front and rear section joists seating into the original slots in the walls.  The four original support beams for the second floor were found to be in excellent condition and are back in place.  A temporary plywood floor will serve until the permanent one can be installed.

There is a feeling of satisfaction about the progress we have made during the past year.  Much remains to be done, and 1997 will see tremendous strides made in bringing the H.I. Lincoln building back to a useful working life.  The front windows and doors should be back in place in a few weeks.  The inside stairs will soon be built so that we can work on the second floor, tuck pointing, replacing the upper windows and the roof.  This stone building can be likened to a diamond in the rough that is just beginning to take on the sparkle and luster of a rare gem.” 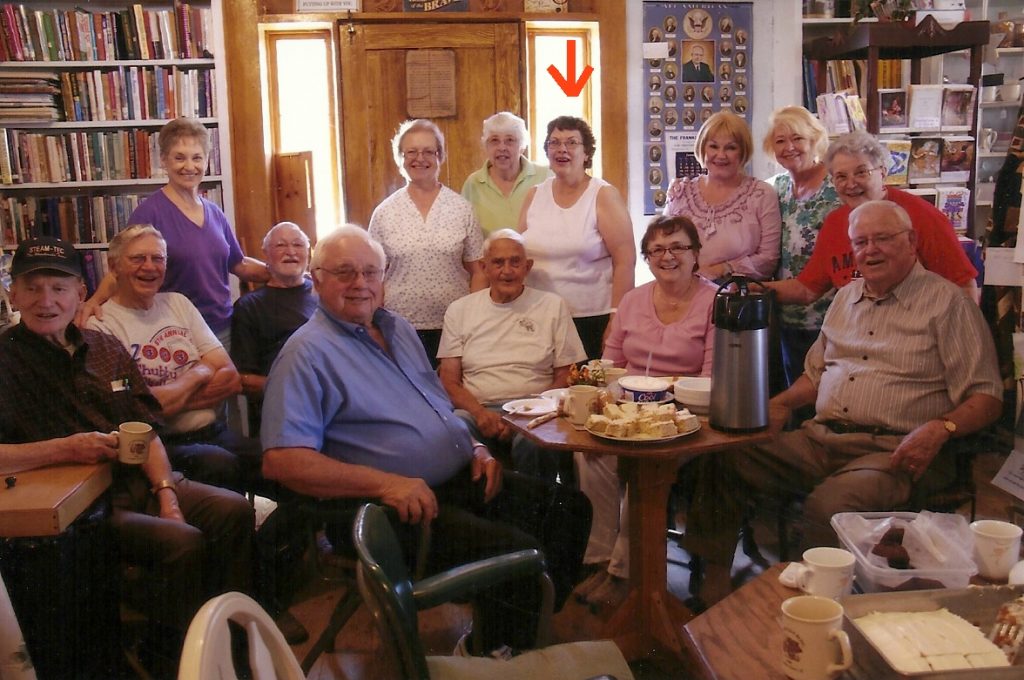 Lynn Asp is in the middle on the back row

Lynn Asp served as the first and very long-term Manager of the Lincoln Highway Association Headquarters and gift shop.  The building in Franklin Grove became a focal place for local people from the Franklin Grove community to come together every morning for coffee.  This informal group became known as the “Coffee Crowd” and coming for coffee became very popular, especially with folks from the community of retirement age.  The image above is a photo taken in 2011.

Back to Table of Contents